The Woman of Willendorf, also known as Venus of Willendorf, is the name of a statue found in 1908. Taking its name from a small Austrian village outside where it was found and measuring only around four inches high, this is a statue in which significance is packed into a tiny frame.

Estimated to have been created between 25,000 to 30,000 years ago, this ancient design has outlasted kingdoms, and found its way to us today. Originally covered in a Red Ochre, traditionally symbolizing the miraculous power of menstruation and birth, this statuette is a potent reminder of the miracle of our existence.

Such a message invites us to reflect on what one has and how one got here, encouraging an appreciation for the small things in life. This can lead to feelings of contentment, and a loss of anxiety as you take a break from chasing that which you don’t have.

Her face is hidden, suggesting a divine status, for who can know the face of a Goddess? While a substantial body indicates this is the statue of someone who lead a life of abundance and fertility.

This representation of a beautiful message makes for a powerful, stunning home decoration, which goes beyond mere aesthetics and invites reflection.

This is a lovely representation of the original statue found so many thousands of years ago.

P
Patricia
This Venus is very nice for my altar. She...

This Venus is very nice for my altar. She has always been one of my favorites.
Shipping was very safe and quick, you will not have any disappointment with this site!🌹

B
Bethany
Lovely replica of Venus. Arrived quickly a...

Uber fast shipping , well packaged and she arrived safe and sound exactly as shown and I love her very much!💚 Thanks!💫 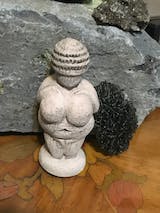